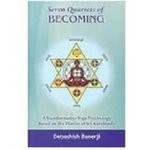 Groomed in a modern academic tradition and post-Enlightenment ideals of creative freedom and social critique, Sri Aurobindo (1872-1950) turned his attention to yoga and the limits of consciousness in its ability to relate to and transform nature. In the process, he documented scrupulously his experiments and experiences based on a synergistic existential framework of practice. Debashish Banerji correlates the approach to yoga Sri Aurobindo took in his diaries with his later writings, to derive a description of human subjectivity and its powers. Banerji constellates Sri Aurobindo's approach with transpersonal psychology and contemporary lineages of phenomenology and ontology, to develop a transformative yoga psychology redefining the boundaries and possibilities of the human and opening up lines of self-practice towards a wholeness of being and becoming.